Acute attacks usually include severe abdominal pain as the main symptom, and can also include weakness, nausea, vomiting, constipation, confusion, restlessness, hallucination, and seizures. There can be other symptoms as well. These attacks can be triggered by certain factors like medications (e.g. barbiturates, sulfonamide antibiotics, anti-seizure drugs, and oral contraceptives), alcohol, dieting, infections, and others. Some people with AIP have few attacks in their life-time, and others can have many attacks. Some women can develop acute attacks around their menstrual cycle.

Acute attacks are more common in women compared to men, and are rare in children. Most people present with symptoms after puberty, in their 20s-30s.

During an attack, patients may often need to be hospitalized. This will allow them to receive medications to handle their pain and fluids if they are unable to stop vomiting or are too nauseated to eat. Panhematin is an FDA approved medication which can help decrease the severity and length of the attack, and is more effective the earlier it is received. Panhematin is administered as infusion once a day for several days to treat an acute attack. Givlaari is a new treatment for people who have frequent attacks to try and prevent them. In very severe cases liver transplant may be considered.

AIP is an autosomal dominant condition. Autosomal means that the defect is not on the chromosomes that determine sex, and dominant means that you only need to inherit one changed gene to have the disease.

There is an extremely rare form of AIP that can happen when someone has two changed copies of the HMBS gene. This form is called “Homozygous AIP” and usually presents in early childhood with serious neurological symptoms like seizures. 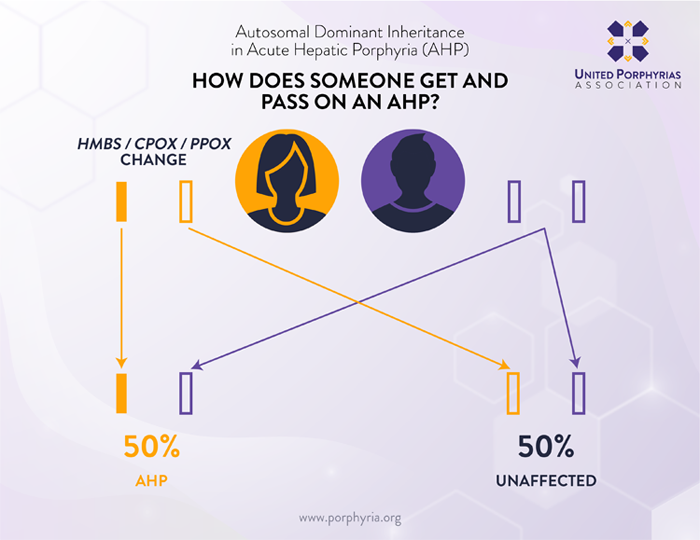