EPP is caused decreased activity of the enzyme FECH, which results from changes in the FECH gene. This results in a buildup of protoporphyrin in the bone marrow and causes the symptoms of EPP. The protoporphyrins go into the blood stream and are transported to the liver and blood vessels. They also build up in the blood vessels under the skin. EPP symptoms typically present in childhood. The most common symptom is severe, non-blistering pain on exposure to sunlight.

XLP is another type of porphyria caused by changes in the ALAS2 gene. Although it is a different gene and enzyme, the result is also a buildup of protoporphyrin and the symptoms are the same as in EPP.

People can first experience tingling, itching, or burning which is like a warning sign to avoid further sun exposure. With ongoing exposure, the symptoms generally progress to severe pain which may be followed by swelling or redness. The most common areas affected include the back of the hands and the face. Protoporphyrins are highly sensitive to sunlight and when they absorb sunlight, they release certain chemicals which cause severe pain and inflammation, resulting in symptoms of EPP/XLP.

The amount of sunlight tolerance varies between people with some able to tolerate only a few minutes and others who can stay out in the sun for much longer.

Due to where protoporphyrin deposits, some people with EPP/XLP may have complications related to liver and gallbladder function (gallstones). Some people can also develop liver damage that, in very severe cases, may lead to liver failure requiring transplantation.

Treatment with pharmaceutical grade β-carotene (Lumitene, Tishcon) and cysteine have been used in the past but there is no evidence that these are effective.

Anti-itch treatments like cortisone or antihistamines do not help the symptoms of EPP/XLP.

Scenesse is an FDA-approved treatment for EPP and XLP. Scenesse works by increasing pigmentation (darkening) of the skin and also has anti-oxidant properties. This drug comes in the form of an implant which is inserted in the fat just below the skin of the belly and given every two months. The implant dissolves by itself and does not need to be removed. Studies have shown that patients on Scenesse were able to tolerate more sunlight without pain and that it was safe to use long term.

Another potential treatment (MT-7117) is currently being tested for EPP/XLP. This drug comes in the form of a pill and is taken by mouth. It also increases skin pigmentation and studies to test its effectiveness are ongoing.

For people with XLP receiving iron may be beneficial.

Liver failure can appear suddenly and progress quickly in some patients. It is generally treated with a combination of plasmapheresis (a process of removing, treating, and returning blood components back), blood transfusions, infusions of Panhematin (the treatment usually given for the acute porphyria), and medications like cholestyramine, vitamin E, and ursodeoxycholic acid. The level of protoporphyrin in the blood should be followed closely during treatment. Liver transplantation is sometimes necessary. It is not possible to predict which patients will develop liver failure. As liver transplantation does not cure EPP or XLP, a bone marrow transplant following liver transplant may be necessary in some cases.

People with EPP/XLP should see a porphyria specialist at least once a year for regular follow-up. People who have liver function abnormalities may need to see a specialist more regularly.

The main management for EPP/XLP is avoidance of sunlight or use of protective clothing and gear.

Iron and Vitamin D levels can be low in people with EPP/XLP, so these should be checked regularly and supplemented if needed. To protect the liver from further injury, Hepatitis A and B vaccinations are recommended, as is the avoidance of large amounts of alcohol and medications which may be harmful to the liver.

Strong operating room lights can cause photosensitivity of the skin and even surfaces of internal organs. Filters are available to cover surgical lights. This is especially important in EPP patients with liver failure. 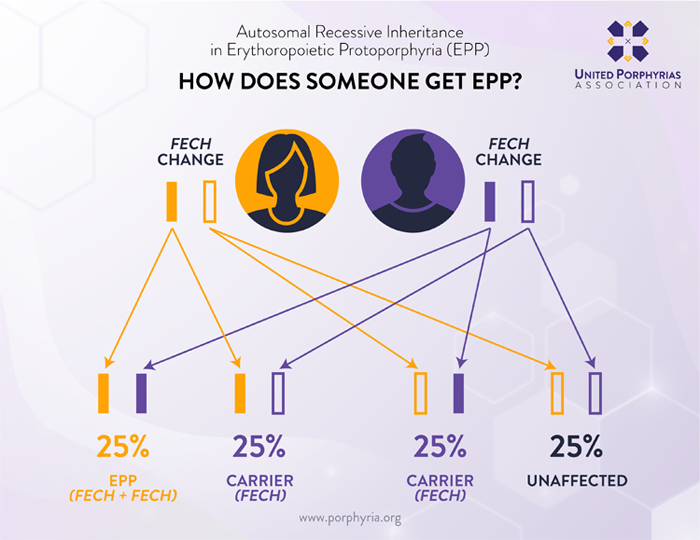 XLP is an X-linked inherited genetic disorder. This means that the defect is on the X chromosome. Females have two copies of the X chromosome, while males have only one copy. Because females have two copies of the X chromosome, they have one changed copy of ALAS2 and one normal copy. A random process in the body causes one X chromosome to be turned off. For this reason, females can present with a varying degree of symptoms ranging from no symptoms to severe XLP symptoms. There is no way to predict this ahead of time. Therefore it is important for family members of people with XLP to be tested for this change so that they can receive appropriate counseling.

If a father has XLP, all of his daughters will have XLP but none of his sons will be affected. 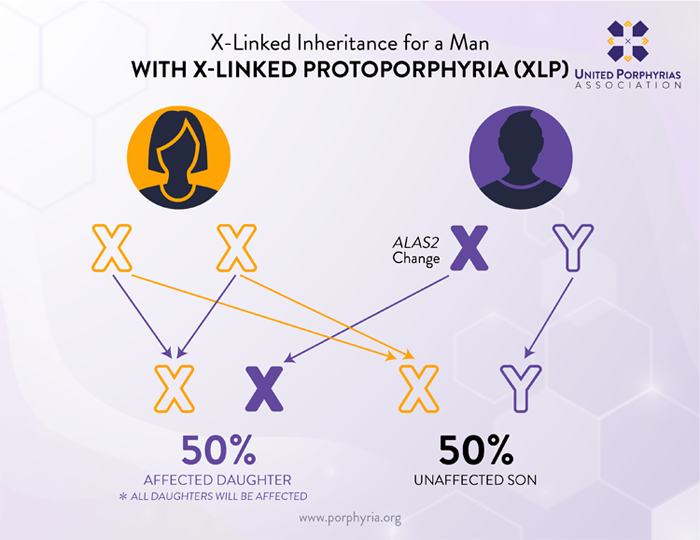 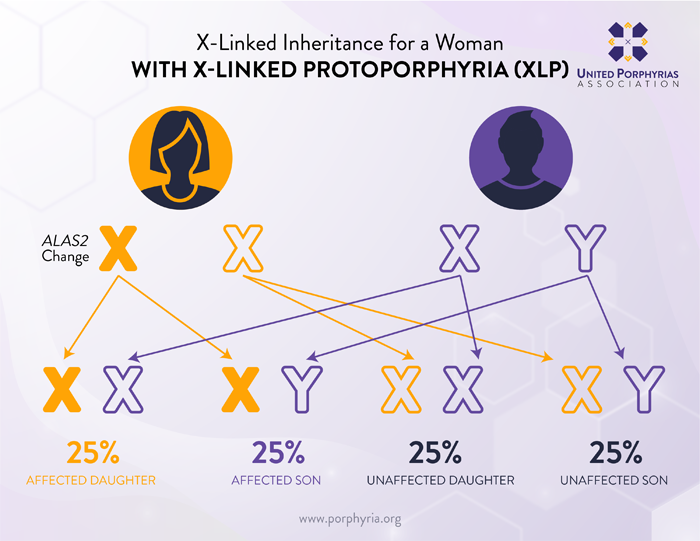