PCT is caused by low levels of the enzyme UROD. PCT symptoms include skin blisters on sun-exposed areas, such as the back of the hands and face and usually start in adulthood. The skin may also become fragile and people with PCT can have increased hair growth, as well as darkening and thickening of the skin. Acute attacks that are seen in the acute porphyrias do NOT occur in PCT.

There are two types of PCT, one is inherited and called Familial PCT (caused by changes in the UROD gene), and the other is not inherited and called Sporadic PCT (with no known gene changes). The sporadic type is more common. There are several risk factors for developing PCT symptoms, including excessive alcohol use, smoking, use of oral estrogens (birth control pills, hormone replacement therapy, etc.), hepatitis C infection, HIV (human immunodeficiency virus) infection, and a disease called hemochromatosis which causes iron overload.

PCT is treated either with regularly scheduled phlebotomies (removal of blood), or with a low dose of the drug hydroxychloroquine, a medication normally given for malaria. In addition, patients should be tested to see if they have any of the risk factor infections, which should be treated if present. These treatments generally work to stop symptoms within 6-9 months.

The risk factors for developing PCT symptoms should be avoided while someone is having symptoms. Generally, after the successful treatment of PCT, blistering does not happen again, but in some people a recurrence of symptoms can happen. This is why it is important to follow-up with a porphyria specialist at least once a year.

Only the familial form of PCT can be inherited, and even in this form people with PCT generally do not have any family members with symptoms. Familial PCT is an autosomal dominant condition. Autosomal means that the defect is not on the chromosomes that determine sex, and dominant means that one only needs to inherit one changed gene to have the disease. 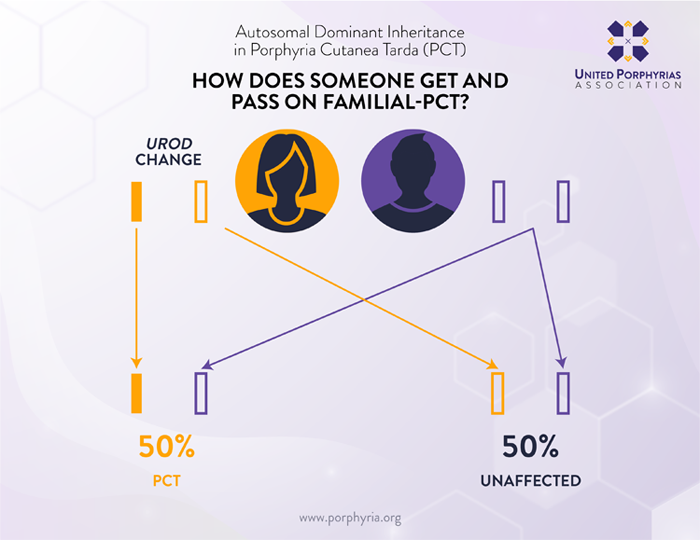